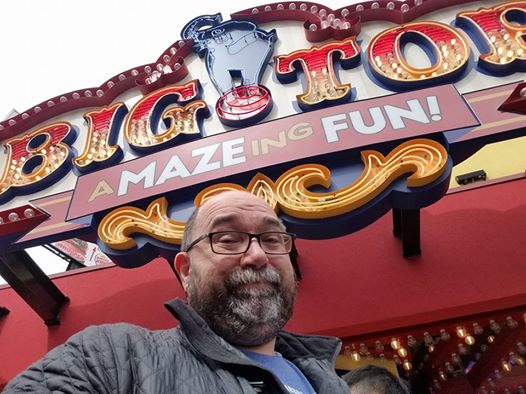 When I was about 11 years old my parents took me and my siblings on a surprise trip to Niagara Falls, Canada (a mere four hour trip from Pittsburgh but it felt like a world away!)

The falls are very beautiful and truly a wonder, but I have a life long uneasiness with heights and railings so I don’t think I enjoyed them as much as most people might! However there was one part of that trip I will never forget. It was my introduction to the Ripley’s Believe it or Not Museum! I was a big fan of the Ripley’s Believe it or Not cartoon, which I read mostly through old paper back books. I instantly fell in love with the museum. It also gave me several lifelong goals. One of which was to someday appear in the Ripley’s collection. I would obtain that goal in 1999 with the creation of a Ripley themed maze. I am told by the archivist that it is still in the collection though too big to display!

That trip as a child to Canada was a big influence on me in many other ways too. I visited the Guinness World Record Museum which would lead to me creating a world record setting maze over 3 decades later!  The museums served as the inspiration for the ToonSeum which I founded. The mirror mazes and other attractions served as inspiration for my passion for maze design.

I’ve only been back to Niagara Falls a few times. Over this past week I had a chance to return. The wax museums haven’t changed much, they are as wonderfully campy as ever. Ripley’s has taken their game up to the next level and the museum is fantastic. Guinness, not so much. It’s dated and has few actual artifacts. The mazes were a blast and as one of the world’s foremost maze artist I accepted the challenge with enthusiasm!

Clifton Hill is much maligned for it’s tourist kitschiness. But that is it’s appeal. It’s just plain silly fun. There in the midst of one of the world’s greatest ancient natural wonders is this campy testament to man’s fascination not with nature, but with ourselves! Our ability to be amazed by our accomplishments in the bizarre and unusual. As remarkable and beautiful as the falls are there is also something beautiful about that brightly lit hill of haunted houses, wax museums, fun houses and tourist trap gift shops. To me it’s a realistic assessment of natural beauty- it’s awe inspiring to gaze at, but after a few minutes of looking you think “okay, I did that, now what?” Clifton Hill suits my ADHD attention span and interests. Give me an animatronic giant replica of the world’s tallest man over a sunset any day! It’s not that I don’t appreciate natures beauty. I do. But beauty gets boring fast. Freakish achievements of world’s largest, fastest, most unusual, those things are endlessly fascinating and inspiring to me and make me want to be a part of it all.